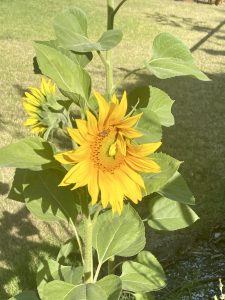 This is the first sunflower to bloom at The Olives. There is nothing special about that – except these are very special sunflowers.

In 2014 a mate of mine stood in a field of sunflowers just like this, and wept. He was in the Ukraine, standing amid the wreckage of Malaysia Airlines Flight MH17, shot out of the skies by a Russian-made Buk missile. Despite denials, it is clear Russian-backed Ukrainian rebels mistook the airliner for a military aircraft. Among the 283 victims were 38 Australians.

Paul McGeough, a former editor of the Sydney Morning Herald, was in 2014 a correspondent for the Australian Fairfax papers and he, together with top photographer Kate Geraghty, reported from the scene of the disaster.

The wreckage of the airliner, mixed and mangled with human remains, passenger possessions including children’s toys, was spread over a huge area including a vast field of joyously bright sunflowers. McGeough saw the terrible irony of such tragic death in a place of vibrant beauty and had a thought: Would it not be wonderful if he could collect some seeds and give them to the families of victims at home?

He imagined relatives in years to come, “glancing out their windows and seeing big, bright, happy Ukrainian sunflowers nodding their cheery heads in the garden.” A living memorial. A reminder of a lost one. A part of a foreign field …

So McGeough pocketed 1.5 kg of seeds, brought them back to Australia, and wrote of his plan to distribute them to relatives in the SMH. Australia’s quarantine authorities pounced. They declared it was illegal to bring seeds like this into the country and confiscated the lot, saying they would be tested and, if found to carry any diseases, would be destroyed.

The tests showed the seeds to be acceptable, but the quarantine authorities needed more proof. So they planted them in a controlled quarantine environment, monitored their growth and harvested their seeds.

Satisfied that these seeds met Australian quarantine regulations, the seeds were returned to McGeough. Again, he wrote of the experience in the SMH and offered seeds to families of lost ones, and to readers.

I contacted him and he sent me a packet of 13 seeds in the winter of 2015. I put them in a drawer and pondered where I would plant them. I wanted a garden bed that faced north east, within view of the house and where they could occupy a dedicated corner.

It took longer than I imagined. Last year, when I had a man with a mechanical digger on site, I asked him to remove a patch of lawn and fluff up the soil for a triangular flower bed near the swimming pool gate.

In early spring I carefully planted the seeds, spacing them so that they were near the drip holes in the irrigation system, and waited … watching. Imagine my horror when I saw a dozen white cockatoos screeching, scratching and impersonating chooks over the flower bed. How they knew they would find luscious sunflower seeds I cannot say; nor did I try to learn. Instead, I hurled abuse, waved my arms and shouted at them and they flew away. For a while. Then they came back.

I felt that was the end of it. McGeough’s effort was wasted. My plans for a memorial – a garden talking point, really – wouldn’t happen. The cockies which often fly over The Olives in whirling, flapping, screeching formations, had won.

But no! In time, two unmistakeable sunflower plants emerged and, weeks later, began to form their flowers. The score was Cockies 11, Me 2. As you can see from the picture, the bees are at work and in time, I will collect seeds from the flowers of the seeds from quarantine, which in turn came from seeds in the field of horror in the Ukraine, and I will let them fall throughout their designated area in the hope that they grow and grow. Even if the cockies do get a few.

If you visit The Olives and use the pool, give them a nod and remember MH17.